Meta CEO Mark Zuckerberg has provided a first proper look at the company's next mixed-reality headset, codenamed Project Cambria, in action. The "high-end headset" is scheduled for release later this year and it will support a new augmented reality experience called The World Beyond.

We see Zuckerberg playing with and petting a virtual creature that's superimposed onto the real world. The clip also shows a user in front of a virtual workstation before looking down at a notepad and writing on it. Reports suggested that Cambria's image quality would allow users to clearly read text, and that seems to be the case.

In addition, the demo shows a virtual workout instructor who appears to be in the same space as the headset wearer. The World Beyond was built with Meta's Presence Platform, which is designed to help developers create mixed-reality experiences. 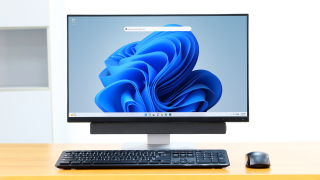 Microsoft could finally be fixing one of Windows 11's worst features

In a new Windows 11 insider build, Microsoft has placed a search bar on the desktop for some users, explaining that this is the first stage of an experiment of ...